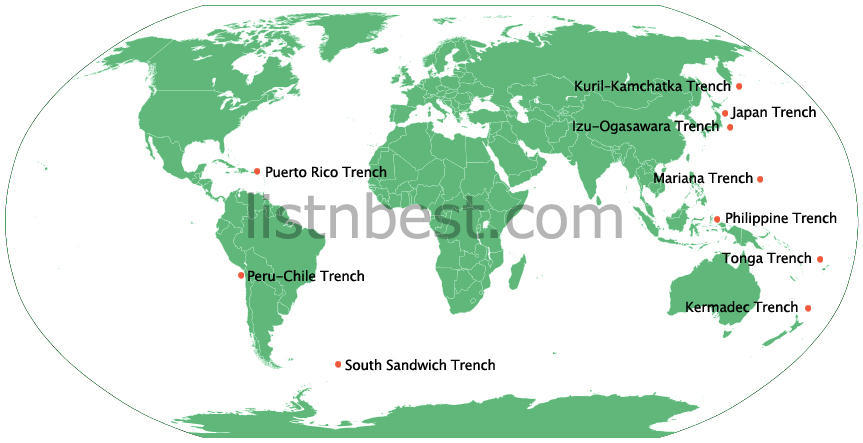 The Atacama trench is also known as the Peru-Chile Trench is approximately 5,900km long with a mean width of 64km and covered some 590,000 km2. The trench is a result of a convergent boundary, defines the boundary between the subducting Nazca Plate and the South American Plate.

Location: Eastern Pacific Ocean, about 160 km off the coast of Peru and Chile.

It is part of the Pacific Ring of Fire lie on the northern Pacific Ocean off northeast Japan, the trench believed created when the oceanic pacific plate subducts beneath the continental Okhotsk Plate. The tsunamis and earthquakes are the causes that continuing movement on the subduction zone with the Japan Trench.

It is lying in the western Pacific Ocean stretched from Japan to the north and also the extended of the Japan Trench, the Pacific plate being subduction below the Philippine Sea plate which created the Izu islands and Bonin Islands with the deepest point.

It is created by the subduction of the Pacific plate under the Indo-Australian Plate, with thousands of kilometer parallel with the island arc and it noted for its very abrupt slope. The trench first descents have been in 2012 by Deep-sea researchers and discovered new species of giant amphipod.

Also known as the Kuril trench formed as a result of the late Cretaceous that created a Kuril island arc and the volcanic arc. The zone is the major earthquake occurred in the recent decades, lies off the southeast coast of Kamchatka.

Location: Off the southeast coast of Kamchatka, northwest Pacific Ocean.

The Philippine trench’s deepest point named the Galathea Depth the 3rd deepest in the world, spreads in length of 1,320km and 30km wide lies in the east of the Philippines. This is created by the collision of tectonic plates and the Philippine Sea is subducting under the Philippine Mobile belt at 16cm per year.

The trench is standing alone in the South Pacific Ocean, the depth known as the Horizon Deep, is the 2nd deepest point on earth lies at the northern end of the Kermadec Tonga Subduction Zone. The tonga leads north-northeast from the Kermadec islands north of the North Island of New Zealand.

The deepest point on the planet with the depth of 11.03 kilometers below sea level and lies in the western Pacific Ocean, about 2,550km in length and an average width of 69km. The earth is radius although not a perfect sphere which 25 km less at the poles than at the equator, so the Mariana trench is not closest point to the center of the Earth, the Arctic ocean seabed are around 13 km closer to the center of the earth.

20 Longest rivers in the African continent